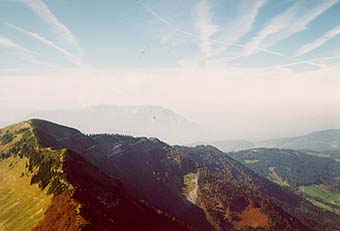 After a short distance on a forest road suddenly there appeared three "Almen" (Alpine pastures) and there two forest roads branched off to the right, none of which you should use. Above the second "Alm" a small footpath branches off. Unfortunately there was no signpost there, so you might mistake the second forest road for the correct path. This footpath offers panoramic view to the west, later to the south and east.

Between the branching-off towards "Schlenken" and the hat-like summet of "Schmittenstein" there was a narrow path, partly secured by ropes, which led from the left onto the summit. The view was magnificant, we were able to see Dachstein, Tennengebirge, Hochkönig, Watzmann, Hochkalter, Reiteralpe and many more mountains.

Standing on the summit of "Schmittenstein" it was easily possible to have a close look through our binoculars at the footpath leading towards "Schlenken". Thus one quite steep spot, secured by ropes, could be seen, the most dangerous part of our entire tour. The descent from "Schlenken", slightly boring, was quickly forgotten and "Schmittenstein" with its path towards "Schlenken" recompensated us for this rather dull section.

By the way, we saw more people and dogs on this tour than on our last ten tours altogether! 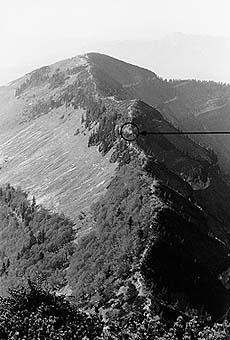 Path to Schlenken with dangerous spot!